The Northern New Jersey Sanctuary Coalition (NNJSC) advocates for a fair and humane immigration system and process, both for those asylum seekers who are detained and those released. As an extension of our mission to serve individual asylum seekers, the NNJSC allies with other organizations to advance public laws, policies, and practices that respect the human rights of all seeking status to live freely and productively within our borders.

Rally outside the Elizabeth Detention Center to release asylum applicants. 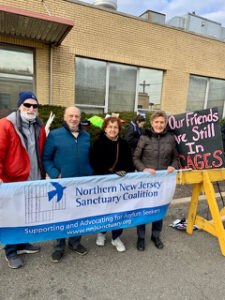 The recent renewal of a contract between an Elizabeth detention center and ICE angered immigrant advocates. (Photo by Karen Ducey/Getty Images)

A Bergen County detainee who was woken up in the middle of the night to be flown to Arizona.  A Haitian migrant who was transferred from detention center to detention center seven times over four years. An Essex County resident who was detained while his wife was pregnant, and didn’t meet his child for two years.

A coalition of advocates is shining a light on the stories of undocumented immigrants who suffered while imprisoned in New Jersey’s immigration detention facilities, part of an effort to urge support for ending immigrant detainee transfers and for an overhaul for federal immigration laws.

“We have seen how families have been ripped apart, especially in the last few months once Essex County announced they would be depopulating their ICE unit,” said Jackie Zapata with Friends First of NJ & NY. “Our friends who called New Jersey their home were transferred to faraway states, far away from their communities, families, and legal resources.”

Gov. Phil Murphy signed a law last month banning state, county, and local detention centers from entering into or renewing contracts to hold immigrant detainees. Now, as the detention centers  empty, activists are pushing for more prisoners to be released rather than transferred to other locations.

Activists are concerned that, as has happened in the past, detainees will be moved to states on the other side of the country, leaving their families to wonder where they are for weeks, if not months. Some of them view the long-distance transfers as retaliation from the immigration agency.

Now the coalition of faith leaders, advocates, formerly incarcerated people, and their family members have formed the Interfaith Campaign for Just Closures. The group aims to push New Jersey’s congressional delegation to support HR 536, which would revamp the immigration detention system.

The bill would bar the Department of Homeland Security from entering and renewing contracts to operate detention centers, remove mandatory detention for certain migrants like asylum seekers, and prohibit state and local officers from apprehending immigrants. It’s supported by just one New Jersey representative, Rep. Bonnie Watson Coleman (D-12), and has not been introduced in the Senate.

“Senator Booker, (who) considers himself a champion for criminal justice reform and immigration issues, would be a great candidate to introduce this bill. Senator Menendez is a champion of immigrant rights issues for so many years, and should be a leading voice in the Senate for HR 536,” said Carlos Rojas Rodriguez, an organizer with Movimiento Cosecha.

Menendez has referred to ICE contracts as “blood money” for counties and states, alluding to the revenue that pours into local coffers from the federal agency.

Last week, the senators released a statement urging ICE to end out-of-state transfers for detainees, and requesting all detainees who do not fall “under the current enforcement prioritization scheme” to be released.

“Not only do transfers expose detainees to COVID-19, but they also threaten the physical, mental, and emotional health of detained individuals. Any form of detention is a traumatic experience, especially among immigrant detainees who are more likely to experience anxiety, depression, and post-traumatic stress disorder both during and after detention than the general population,” they said in a letter to ICE officials.

Zapata said the statement doesn’t go far enough. All detainees should be released, she said, rather than leaving it up to ICE to decide who is a priority and who isn’t.

“This shows how harsh our current system is”

During an event Thursday, the faith leaders, advocates, and family members of detainees shared powerful tales of loved ones traumatized by detention.

Zapata told the story of an undocumented man who lost 52 pounds after he was transferred from Essex County Jail to a Nevada prison. He was finally released, then met his 2-year-old daughter, who was born while he was jailed, she said.

“If that’s not a way of playing with someone’s life, I don’t know what is. This shows how harsh our current system is,” she said.

Bia Kamara spoke about his son, Alex, an asylum seeker from Sierra Leone who was detained in 2019 in North Jersey. He was transferred to Arizona, then Miami, where he’s currently being held, and faces deportation to the country he tried to escape.

“Don’t even consider sending him to Sierra Leone, because that will be as good as sending him to his death bed. There’s nobody there he knows, he doesn’t know where to start — you put him there and it’s taking a fish out of water and putting the fish on dry land,” Kamara said.

Though Essex County has emptied its jail of detainees and Hudson County said it intends to do the same, there are no similar plans for Bergen County Jail, which remains home to 25 immigrant detainees largely from New York. The county has an indefinite contract with ICE, and advocates are pressing Bergen officials to sever it. The county brings in $120 per detainee daily from ICE.

Moscow said one of the goals of the new group is to continue to pressure officials to close the state’s last publicly-run immigrant holding center.

“The reality is this is a Democrat’s state,” said Moscow. “If Governor Murphy, Senator Booker, Senator Menendez, our congressional representatives unite and say it’s time for this to end, and the way to end it is not transfers, but going back to their community, it would happen.”

We support the urgent calls for just closures of ICE detention centers and creation of a humane immigration system that welcomes newcomers. We especially call for the permanent closure of all detention centers in New Jersey, including the Bergen Jail. People belong in #CommunitiesNotCages  we call for #ReleasesNotTransfers.

Civil rights advocates, faith and community leaders called on local and federal officials to ensure the release of individuals currently detained in ICE detention facilities and thanked Governor Murphy for signing the bill.

“Today, New Jersey sent a firm message that we refuse to be complicit in ICE’s cruelty, and made clear that we cannot allow our communities to suffer the indignities of immigration detention. With this monumental step, New Jersey demonstrates its commitment to the national movement to end the mass detention of noncitizens.”

“Joseph was forgotten in his prison, but on his release, he saved the whole nation. We are a country of immigrants. It is not only a moral failure to imprison those whose only “crime” is to want a better life for themselves and their families, but we forget that those who have come here are choosing blessing over curse, not just for themselves, but for all of us. When we choose justice and compassion, we not only improve the lives of others but of our whole polity. May this legislation be the next step toward liberation.”

“We are grateful to Governor Murphy for signing the anti-detention bill—a bold and historic step toward making New Jersey a fair and inclusive state for everyone including immigrants. However, this bill does not affect the current contracts in Bergen and Hudson counties and in Elizabeth. Therefore, much work still needs to be done to advocate for releases, humane conditions, and alternatives to detention not only in New Jersey but across the country.”

“(The) Northern NJ Sanctuary Coalition, composed of 10 cross-denominational faith-based congregations and organizations, welcomes Gov. Murphy’s long-overdue action in signing the anti-detention bill into law. We call on New Jersey and federal elected officials now to take all possible steps to close existing ICE detention centers. We strongly urge Bergen County Sheriff Anthony Cureton and the Bergen County Commissioners to immediately exercise their power to end the Bergen County Jail ICE contract. Most importantly, detained immigrants must be released, not transferred to sites away from their families and attorneys. #ReleasesNotTransfers.”

“We are excited and relieved that the Anti-Detention Bill has finally been signed and will now be put into action! To us, this win symbolizes the strength of community, coalition building, and solidarity networks. We are one step closer towards holistic rights for all immigrant communities, and are so grateful to and inspired by all those who put in hours of work to make this happen.”